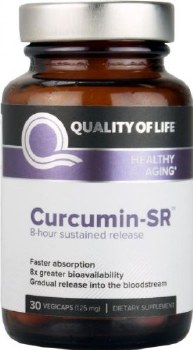 Curcumin is one of the most promising ingredients for promoting a healthy response to inflammation, which is often attributed to physical exertion.*

Curcumin-SR is unique in that it delivers curcumin in a special micronized, sustained-release matrix. This means that it is released over time, stays in the blood longer, and is therefore active longer than regular curcumin.*