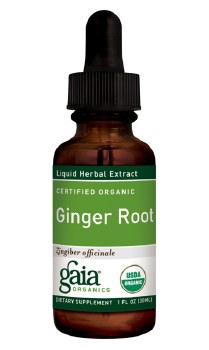 
Ginger and her cousin Turmeric are proud members of the zingiberaceae family and grow in sub-tropical, volcanic soils in the southern hemispheres. The plant is thought to have originated in tropical Asia and is widely cultivated in the Caribbean and Africa. many cultures report similar uses of this plant. It has been used as a favorite "diffusive" circulatory tonic and warming agent, to calm occasional nausea, and to aid in a healthy immune respiratory response. It has also been used to support a normal inflammatory response. Ginger is one of the most widely consumed aromatic spices on the planet.

The fresh rhizome in Ginger is less hot and contains more of the flavor components such as triterpenoids and volatile oils which act on the peripheries of the body. The dried rhizome is quite hot from its concentration of pungent nonvolatile compounds known as gingerols and acts centrally to dispel what are referred to in Traditional Chinese Medicine as "Cold-Wind" conditions. Ginger has shown in numerous clinical trials to support a healthy inflammatory response and as a beneficial nausea aid. It is thought that Ginger promotes normal production of inflammatory markers which would explain its action on the immune system as well as its ability to promote healthy circulation and inflammatory responses.

*This statement has not been evaluated by the Food and Drug Administration.
This product is not intended to diagnose, treat, cure, or prevent any disease.

This product has not yet been reviewed.

Please login or register to write a review for this product.