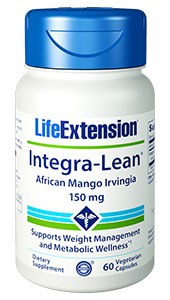 Fat cells (adipocytes) secrete a hormone called leptin that tells our brain we have eaten enough. Leptin can also facilitate the breakdown of stored triglycerides in our adipocytes via the process of lipolysis. Heavy individuals have startlingly high blood levels of leptin, indicating that their cells have become resistant to the leptin that is supposed to prevent them from putting on so many fat pounds.
An extract from an African mango called Irvingia gabonensis has been shown to help support leptin sensitivity in overweight people. In a recently published study, irvingia demonstrated beneficial effects upon leptin blood levels, followed by weight loss and inches off the waistline. In addition to supporting healthy leptin sensitivity, irvingia has demonstrated the following beneficial effects on key aspects of metabolism:
• Glycerol-3-phosphate dehydrogenase is an enzyme involved in the complex biochemical process that converts ingested starch and sugar calories to stored body fat. Irvingia has been shown in studies involving fat cells to reduce the activity of glycerol-3-phosphate dehydrogenase, which may help reduce the impact of starch and sugar calories on body fat.
• Scientific research on fat cells suggests that irvingia has alpha-amylase-inhibiting properties55 (like InSea2® and Phaseolus vulgaris) which can help support a slowing of the rate of carbohydrate absorption from the intestines and a reduction of the caloric impact of starchy and sugary foods.
• Adiponectin is a hormone involved in helping to maintain insulin sensitivity on the membranes of energy-producing cells. Big fat cells produce less adiponectin, and overweight people need to be especially concerned about maintaining healthy levels of adiponectin to support insulin sensitivity and metabolic fitness. Scientific data suggests that irvingia helps support healthy adiponectin levels.
Based on impressive human clinical data that irvingia supports weight loss of over 20 pounds on average in 10 weeks, this standalone extract of Integra-Lean® African Mango Irvingia is also available to help promote optimal weight.
This supplement should be taken in conjunction with a healthy diet and regular exercise program. Results may vary.

*These statements have not been evaluated by the Food and Drug Administration. This product is not intended to diagnose, treat, cure, or prevent any disease.